The Extraordinary Voyage of Kamome

This sweet story, intended for lower elementary grades, is intended to provide a window for discussing earthquakes, tsunamis, marine debris, preparedness and cultural awareness in the classroom and within families.

On April 7, 2013, a little over two years after the magnitude 9 Tohoku-oki Japan earthquake triggered a massive tsunami off the coast of northeastern Japan, a lone boat washed up on the shores of Crescent City, California.   The confirmation of the boat as belonging to a high school in Rikuzentakata was first step in an amazing story that has linked two tsunami-vulnerable communities on opposite sides of the Pacific and initiated friendships between high school students in Rikuzentakata. This story is now told in a children’s book to be released by Humboldt State University Press in November, 2015.   Co-authored by Humboldt State University Emeritus Geology Professor Lori  Dengler and Amya Miller, the Director of Global Public Relations in Rikuzentakata, the book features illustrations by Arcata artist Amy Uyeki.

Psychologists believe that children can cope more effectively with a disaster when they know there are things they and their family can do to keep safe.  Providing age-appropriate information will help them to understand what might happen and lessen their anxiety if a disaster does occur. 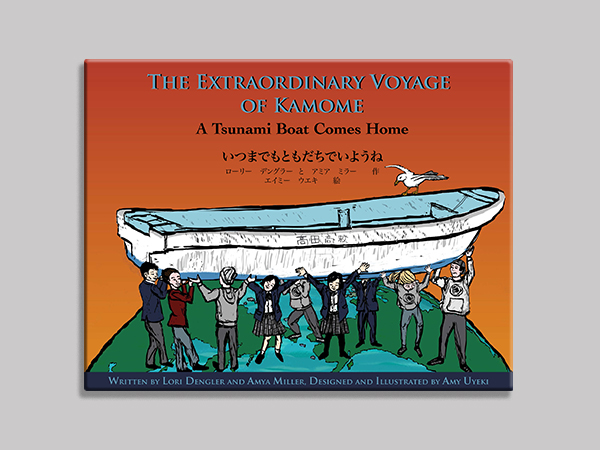 Bookstores, museums, gift shops and other markets interested in obtaining copies of the book for sale, please email kamome@humboldt.edu.